Winter is coming. As much as I love fall I hate winter. I wrote about my love for fall in a recent blog. I live in Houston so my dislike of winter is not because the weather is so cold since our winter

only involves a couple nights of below freezing with most days seeing highs in the high 50s to low 60’s. We live in one of the best climates for winter if you don’t like seasons, but the prolonged cooler temperatures does mean brown grass and leafless trees. All the holiday decorations come down so the one cheery element in an otherwise dreary season has been removed. Each year after taking down my decorations the house seems a little emptier, a little colder. And most importantly college football ends. It doesn’t get drearier than that.

dinner table often lead to louder disagreements than the recent presidential election. There are many “mixed” families who cheer for different teams on Thanksgiving weekend. Our family is no different. I married a Texas Longhorn, but I am University of Houston grad. My daughter and son-in-law went to TCU and one of my sons is currently attending University of Houston. My son-in-law’s family are big Oklahoma fans so on Thanksgiving we really couldn’t talk about college football since Texas plays TCU today and Houston beat Oklahoma this year. Instead, we watched the Cowboy game and kept our opinions to ourselves in order to save Thanksgiving.

This year I fear winter more than ever. With the University of Texas having had one of its

worst seasons on record rumors are rampant that Coach Charlie Strong will be sacked leaving his job open – one of the most coveted coaching jobs in the country. LSU has already fired their coach. Oregon is also looking for a new head coach. Houston’s coach, Tom Herman, who has had two great seasons at University of Houston, brought the Cougars into the national rankings –number 5 in the nation at one point this year. He will have many options once the season ends. Rumors abound that he will leave to go to a bigger school and that school could be the University of Texas or LSU. I have cheered for the Texas Longhorns since I was a child, but both my parents went to University of Houston before I did, and now my son is there and so is my heart.

Back in the day, most of the big Texas colleges like Houston, Texas, Texas A&M, TCU, Rice

and Baylor were all part of the Southwest Conference. It was such a fine time to watch football and cheer for and against teams with friends or against them. When Houston and TCU were shut out of the Big 12 years ago things changed for the Cougars and the Horned Frogs. Their programs were diminished. Gary Patterson, the coach of TCU was able to fight his way back and was invited to join the Big 12 a few years ago. Houston was on its way to doing that this year with Coach Tom Herman leading the charge, but the Big 12 decided not to expand. This was a bad decision by the Big 12 in this blogger’s opinion. I believe it will ultimately lead to the Big 12’s demise in a few years.

While women, especially southern women, love football, this is and likely will always be a male dominated industry. Big time college football is big business for the universities. It brings in huge dollars for schools, adds to their prestige, plus offers great opportunities for the elite athletes playing on scholarship. Playing football can literally change the lives of the young men who play, but it also can change the lives of the men who coach. The most fascinating thing about this game especially with the dawn of social media is the rumor mill. Men love to gossip about sports and football. And for whatever reason sports journalists, professional game callers (djs for football J) and alumnae report what they hear as if from the horses mouth, but you actually never know what is true and what is not. All the same people who have complained about the reporting practices of the media during the presidential election seem to have no concerns that the sports media report rumors all day long. In fact, not only do folks seem not to be bothered by this, they immediately go to Twitter to relay the latest “news” they just heard. In truth, for most of us this news is not really important in the bigger scheme of things. It really only matters if you are one of the kids playing on the team in the news – then it gets dicey. For Houston you saw that play out after its team, which mounted a HUGE victory over Oklahoma in a sold out game in NRG stadium, lost a couple weeks later to SMU, a small, private university in Dallas.

After today when the Coogs play the last game in its season, Coach Tom Herman is going to begin to evaluate his opportunities. He will deservedly have many. A couple of those opportunities mean going to big schools with established programs, huge stadiums with television contracts and a large group of big donors and alumnae who like to win games. 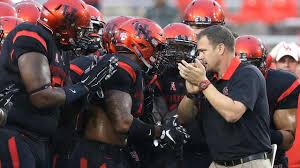 That certainly helps with recruiting, but it will mean a lot of time on the road and a lot of pressure to win every single game and be in the playoffs every single year. And then there is an opportunity to stay in Houston where the recruiting potential is boundless without ever having to get on an airplane. It is a place that loves him with a growing fan ban and supportive alumni that are grateful to him and to the university for putting us back on the big stage. Tilman Fertita, who chairs the Houston Board of Regents, has promised that Coach Herman’s decision will not be about money. Coach Herman has already been offered a seven-figure raise this week after doubling his salary just last year. He can almost name his price plus get the perks he needs for himself and his coaching staff and team to continue to win. Perks like more money for his coaches, a $20 million practice facility and coaching offices closer to the facility. Because the conference Houston plays in is smaller and less prestigious than the Big 12 or SEC, this choice means he delays getting into the Big Time for a couple of years. He will have to schedule his big games with teams outside of conference and any conference losses will knock him out of contention for a playoff spot. But, if he hangs in there the Big Time will come to him. Staying with Houston means he gets to the Big Time on his terms with incredible support from all the fans in Houston. He has time to hone his craft and receive the support he needs to do that. Yes, he has some tough decisions for a rising star. It is a nice play to be. Regardless of what he decides, I am grateful for the gift he has given this university and our city. We have gotten to watch some great football over the last couple of years and see our hometown school rise to new heights. I am a very proud alum. Go Coogs!